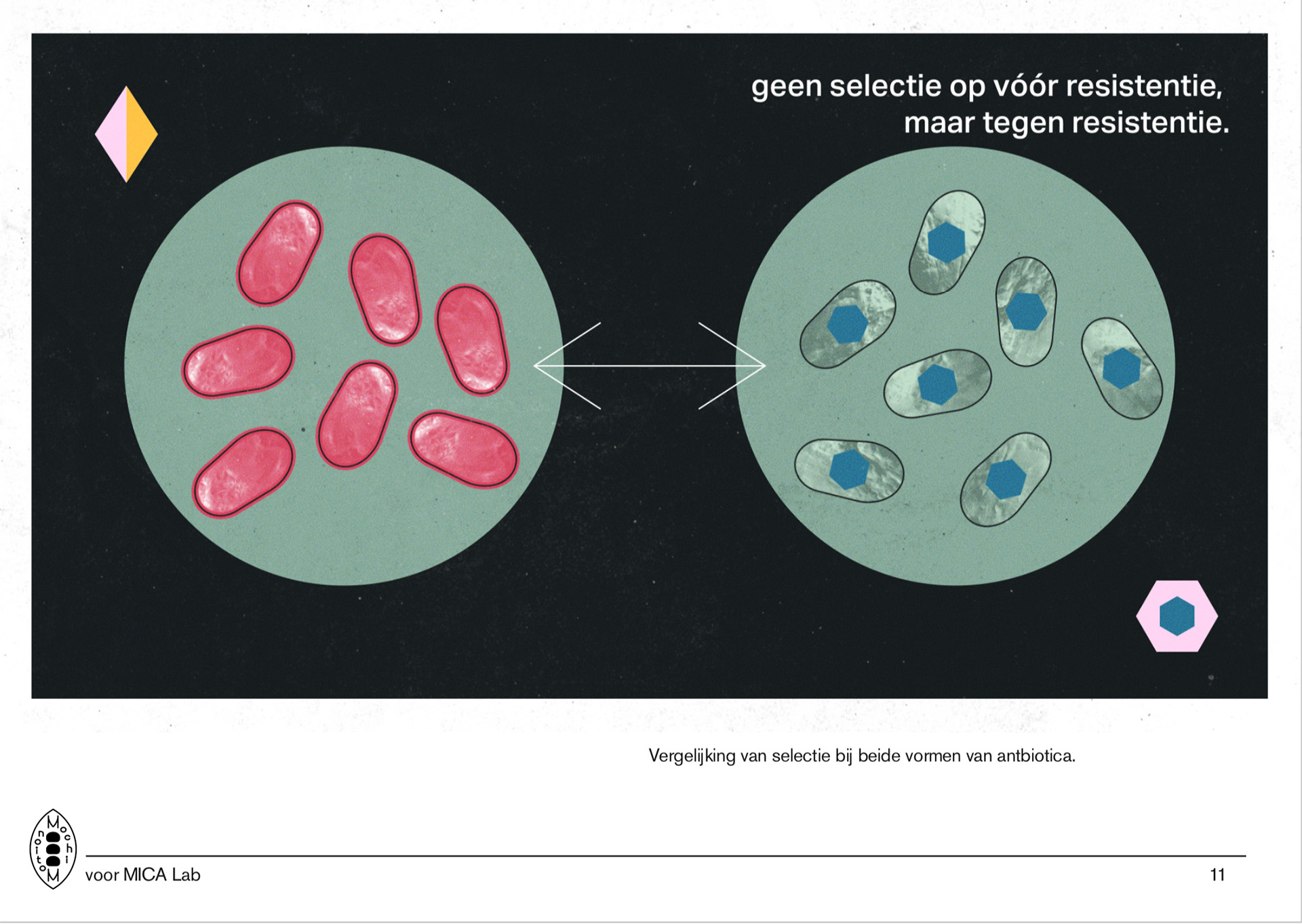 With the arrival of the new year (and decade) it is a good time to pick up the more in-depth blogging routine again, in particular process breakdowns of recent projects.

The very last weeks of 2019 unexpectedly turned out very busy with several last-minute commissions. Though unrelated, respective projects had the kind of subject matters that usually demand dry corporate animation, but which, in this case, could be handled in creative and colorful ways at the clients’ requests.

One of these projects has in the meantime been posted to our portfolio: a scientific animation for MICA Lab (of Leuven University).

The animations explains a new technique of dealing with harmful bacteria without allowing them to develop resistance to antibiotics.

The new approach targets the bacteria as a community, by forcing the weaker nonresistant bacteria to out-evolve the resistant ones (the latter expend a lot of energy in order to sustain the group, leaving them with little leftover power for competing in the natural selection game).

The researchers at MICA Lab were specific about pursuing a more creative graphic style for visualizing their findings. From their website it’s already obvious that this team of scientists cares for the presentation of their content. From the elegant and color scheme to playful and abstract takes on microscopic worlds, there’s an ambition to make any outsider as excited about microbiology as these scientists are themselves.

The video is supposed to be a very short summary of the research’s subject and findings. Something between a teaser and explainer. Specialists who would find simplification or stylisation distracting would still have access to the main research paper. So the video was allowed to use artistic means to convey the strange shapes, colors and textures of the microbial world, but still in a minimalist way, for the message to be clearly understandable for a wider audience.

Our contacts at MICA Lab gave some cues (based on selected shots from our showreel –all from non-scientific animations) on which sort of aesthetic to pursue. The final art direction has the organic, almost psychedelically alien impression of microscopy as its basis and remaps it onto simple geometric digital iconography.

During the design process, what we were making ended up having much in common with imagery from previous eras. It’s easy to see some connection with animations like Tusalava by Len Lye or Arrow To The Sun by Gerald McDermott –both works that are rooted folk imagery from much more ancient cultures.

In a less mystical realm, our animation follows in the footsteps of a particular colorful tradition in scientific graphic design (notably in crossovers between science and the commercial world, for example print ads for energy-related technology or the pharmaceutic industry). Seeing the connection made us realise that this tradition has become fairly rare: most examples are found in ads and textbooks from mid-century to the nineteen-seventies. It can be argued that this timeframe corresponds to late modernism and early post-modernism, in the spirit of which the mentioned scientific design clearly emerged.

But the surprise is not that (post-)modernist design has disappeared. It has just shifted towards (niche) advertising for fashion, food and entertainment industries. Architecture, tech and science appear to have abandoned it in favor of more sterile, neutral visual characteristics. (Note 1: possibly influenced by the pragmatic interface designs of software and the prevalence of software in our lives inside the lab and out. Note 2: and/or maybe it’s coming full circle by following the rules of hyperfunctionality from early-modernism).

In natural science in particular this would be a remarkable norm, as it strips a biological reality of (the explicit presentation of) its organic characteristics, reimagining it as uniform, almost mechanical, diagrams. A similar shift can be seen in other examples of scientific imaging, for example when comparing renaissance models and drawings of internal human anatomy, with their more plasticky color-coded contemporary equivalents. Maybe it has been found that the collective unconscious reacts too strongly to the sight of flesh and slime to deal with it rationally and systematically?

Taking these thoughts into account, the scientific community may call upon designers and artists in situations where organic worlds (in particular ones that are inaccessible to the naked eye, like microscopic activity) need to be made imaginable. Sometimes, in order to effectively communicate a message, we need to find the sweet spot between undecipherable (and in the case of blood and guts sometimes unbearable) photorealism on one side and abstract disembodied diagrams on the other. This realm of wonder and subjective impressions, the insertion of artistic whim into serious science, may seem like a counterintuitive method for pursuing quantifiable scientific truths, but it provides an entry point for the imagination. Imagination is a different phenomenon from imaging/visualisation, but one of possibly equal importance for innovation and discovery. It does not seek to replace standard theoretical and experimental scientific methodology, but rather to provide an addition to it, like a conversion point between the map and the territory. Like folk art, it provides a reminder of the presence of a living reality beyond the surface of everyday human activity.