This is the first of a series of 3 short write-ups that serve as an excuse to share some amusing behind-the-scenes material from our turbo-preparations for the Human Voice Sample project. Click here to go to the original portfolio page.

The assignment
Simon Halsberghe from BXL Records, a small local electronic music label, asked us to create animated versions of 3 pieces of artwork (created by  Soumaya Phéline Abouda) from his new EP, Human Voice Sample, as a social media announcement campaign for the EP’s release. Prime directives were to stay true to the original artwork (so to work exclusively with the existing visual elements) and to animate in synch with the music (may seem obvious). Some art direction keywords from BXL Rec HQ: Tex Avery cartoons/Jim Carrey The Mask, Fear And Loathing in Los Emoji, retro face morphing vfx, Weirdcore depth mapping.

The challenge
For each animation, the base art consists of a grainy black and white photo, with a cartoony composition of emoji on top. Both these layers are rather static, which limited the available options to introduce motion into them. Any such motion should also “feel natural” within the universe of both the artwork and the music. The emoji compositions should retain their colourful sugary energy throughout the loop.

The takeaway
As usual, the solution was to use the limitations as a gateway –as an advantage. As the music itself consists of (Human Voice) audio samples, the still components of the imagery are to be used as samples that evolve over time. When the motion of old media is reduced to its smallest unit (ie the smallest unit of a traditional film is the still photograph –sequenced with surrounding still photos at a rate of 24 photos per second), why not depict it as an entire ecosystem of smaller new-media units (in this case the emoji)?

The photograph is decidedly a still image: all 3 pictures show Simon in a dynamic pose, in the middle of some movement. No amount of digital rigging and animation could overwrite this original frozen-in-time posture in a remotely natural-looking way. Emoji, similarly are static icons.

The artwork contains areas that are quite emoji-dense (respectively the Hokusai jacket, the speaker beehive haircut and the peanut hair). There, a simple organic/random pulsation of each individual emoji suffices to translate the psychedelic effect to animation. Simple after effects wiggle expressions and basic FK rigging on the peanuts did the trick.

Each other emoji, acting on its own (or forming a simple absurdist unity with a neighbour, like the steak-peach nose) required individual consideration of how it should move, what relationship it has with the photo/music/other emoji, when it should appear and disappear, if at all.

In the title track, Human Voice Sample, the blue girl heads seem to whisper the lyrics into a drowsy Simon’s ear. The Apple library of emoji, which is the specific variety used in the artwork, does not natively exist in a vector format (worse: the standard rasterized images are available no larger than 160×160 pixels). In order to break the crucial emoji down into animatable layers we’ve had to rebuild them from scratch. The vector-based reconstructions can be scaled as needed without quality loss (especially useful in the third animation, E Switch Pattern, which relies on an infinite zoom effect) and allow for more rubbery animation options, like the Tex Avery inspired eye-popping in all 3 animations. 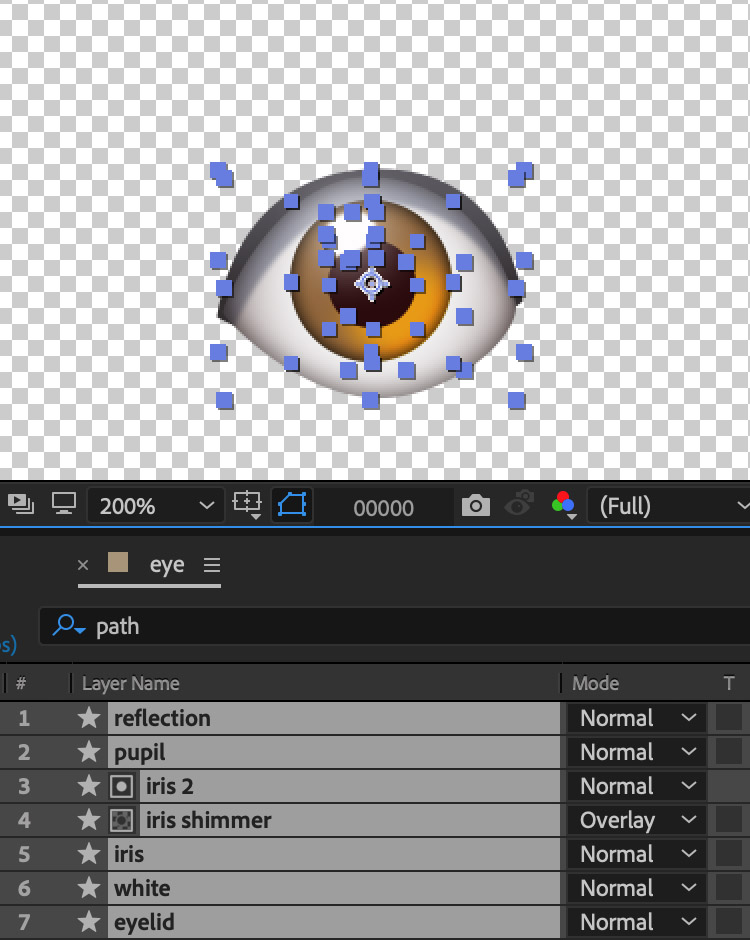 In the title track, Human Voice Sample, the blue girl heads seem to whisper the lyrics into a drowsy Simon’s ear. The Apple library of emoji, which is the specific variety used in the artwork, does not natively exist in a vector format (worse: the standard rasterized images are available no larger than 160×160 pixels). In order to break the crucial emoji down into animatable layers we’ve had to rebuild them from scratch. The vector-based reconstructions can be scaled as needed without quality loss (especially useful in the third track, E Switch Pattern, which relies on an infinite zoom effect) and allow for more rubbery animation options, like the Tex Avery inspired eye-popping in all 3 clips.

The sequencing of separate emoji and their component layers would have to “feel” right within the structure of the short music loop. The first “Human Voice Sample” lyric would be whispered by the blue girls. Simon himself confusedly repeats the sample, but in order to do so, must become an emoji-head himself. Afterwards the girls should re-appear in their original position in order to move seamlessly into the next cycle. This is the kind of intuitive logic/language that’s needed to keep this artwork’s momentum going, throughout the 15 sec duration of the music loop.

To make things even more esoteric, the appropriate energy for the Human Voice Sample animation revealed itself in a dream (yeah). At the time of researching emoji-specifics for this project (like version history of emoji libraries, the tech specs of the Apple emoji as compared to their Android or Facebook counterparts and so on) I briefly suffered either some kind of food poisoning or a nasty flu. Sweat-bathed feverdreams that night were journaled as follows:

Researching emoji history – I am surrounded by books filled with nothing but endless lines of emojis as letters. (I am) rearranging the emoji around me to make sense of them. I learn of the 3 Great Dynasties of Emoji throughout the ages. What are the differences between them and their historical significance? The emojis dating back from ancient Sumerian societies are transforming my ways of thinking. (Then things get completely incoherent. I lose all control over the whirlwind of emojis rushing in all directions, then something about ritual human sacrifice).

The experience of this fever dream had a lot of influence on the vibe of that first animation, and inadvertently laid the foundations for the other 2. The trance in which Simon seems to be while he hears and repeats the words Human, Voice, Sample, not being able to differentiate his own being from the flow of emoji hieroglyphs around him, is exactly how the dream felt.

Purchase Human Voice Sample EP here! In the next post I will look at the glitchy stretchy 3D animations used to glue photo and emoji together.